Specializing in Breeding and Training Golden Retrievers for 40 Years.
TEACHING DIANA HOW TO FETCH 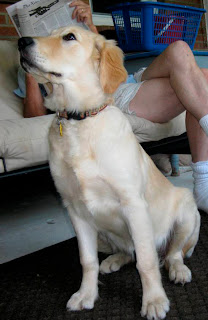 Hi, Barb and all!

Yesterday, I was playing fetch with Berthe (she’s obsessed with fetching all balls), and the ball rolled under the backyard gate. I let her out. She went to get it. She came back. I closed the gate.

We played for a long time. Then, I went to the porch to read.

A little later I saw her standing at the gate, she had decided to roll her balls under the gate and wait for me to open it up, let her retrieve, and let her back in. (I did as I was obviously instructed.)

Then, a little later, I watched her as she got her ball, took it to the gate, placed it gently on the ground under the gate, steadied it so it wouldn’t roll, then pushed it through with her nose.

Then she looked at me.

I got up, opened the gate, let her get it, closed the gate.

I have now learned how to fetch.

p.s. In her picture here she looks adoring, but believe me, I’m the one who is adoring her!