Specializing in Breeding and Training Golden Retrievers for 40 Years.

Specializing in Breeding and Training Golden Retrievers for 40 Years. 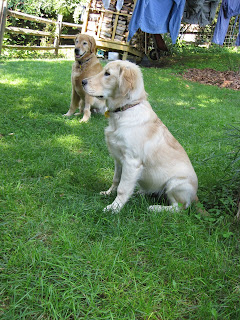 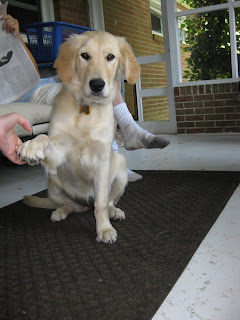 Dear Barb and Russ, Well, the fuzzy kid is one year old today. Time to finish up puppy food and head for the big dog stuff.

Congratulate Emmy and Captain. They did a fine job of making this pooch. Here she is–Berthe–in a couple of pix. That, of course, is Luca in the background in the second photo.cold and snowy up north, and we’ve had a bit of cold and a touch of snow, but it feels like spring right now, and both pooches are healthy and happy and still just a delight to be with.

Here in Virginia, Chuck is starting our garden. I know it has been

Looking at the picture on your blog of Oliver (who must be Berthe’s brother), I realize how much she is a lovely combination of Captain and Emmy. She is closer to Captain’s coloring but small like Emmy.

Chuck calls her “little one,” and she is at least a head shorter than Luca who (I think) takes after his father, Banner.

I don’t know if you’ll remember, but it was really hard for me to talk Chuck into a second dog. Now, as with Luca, he is the doting male figure in Berthe’s life. She insists on sleeping on his side of the bed (on the floor, of course, on her own bed). And, even when he is out of town at The Open Door Community, she won’t shift. If I move her bed to my bedside, she paces until I move it back.

He calls her funny little names, defends her if I think she needs scolding, and absent-mindedly strokes her beautiful and soft fur as he reads or watches television.

When we all walk together, she still wants to be even with Chuck’s leg though I have her on the leash and he has Luca. She looks up at him like he’s the best thing going and when I say, “Go to Chuck!” she runs directly to wherever he is.

The more I think about it, the more I’m convinced that Chuck fights getting dogs only because he knows how fully he falls in love with them–and them with him. Truly, it’s a beautiful thing to watch him with both Luca and Berthe