Specializing in Breeding and Training Golden Retrievers for 40 Years.
GINGER 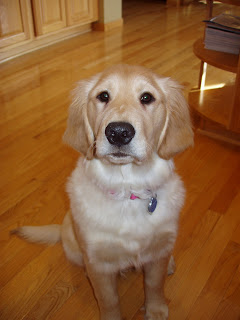 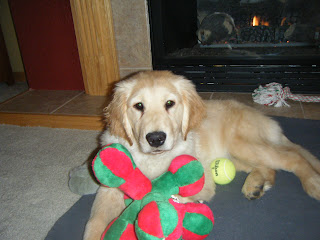 I have been thinking of sending you an update on Ginger (purple girl from Jewel’s litter) for so long…Ginger is such a good puppy – she goes everywhere she can with us (absolutely LOVES car rides and dropping the kids off at school/picking them up and seeing all the kids and teachers!). Everyone can’t believe how mellow she is, and what a great disposition she has! We routinely have a group of 6-7 year old boys hanging out at our house (often times running, laughing, and yelling) and she is very patient and good with them! You were right when you said it would be hard for us to do the crate training since we work from home (and it was, we just wanted to be with her all the time)…but, we have figured it out and have a good routine going and potty training is going really well (no accidents in her crate at all! – a few in the house that were our fault…). The other day she dragged her leash over to my daughter because she wanted to go outside and play/go for a walk….she also had to go potty – it was so cute!

She just completed puppy kindergarten and is picking up everything very quickly….She is especially good at sit, down and leave it, but we’re still working on not chewing on the bushes and mulch in the backyard! She’s also recently figured out that there’s food on the table (or counters) and so we have plenty of opportunity to practice “off”. She is starting basic obedience in just a couple of weeks. She is just so sweet and we’ve also learned she is very sensitive and empathetic; when one of the kids is sad or hurt she feels so bad for them and won’t leave their side until she thinks they feel better. She loves her walks and playing outside in the snow and also playing with her best friend (the next door chocolate lab puppy). She is a beautiful golden and we can’t imagine our family without her! I’ve attached a picture of her (she just went to the vet yesterday and weighed in at 34 pounds….) – isn’t she beautiful!!