Specializing in Breeding and Training Golden Retrievers for 40 Years.
AN UPDATE FROM CROSBY 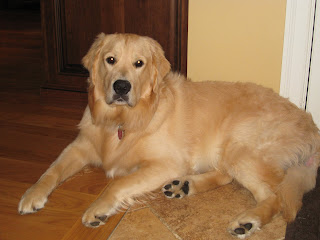 I’ve been meaning to write you for some time now and it just occurred to me that you’re probably getting all ready for the State Fair so I should check in with you before then, while you still have your head above water J!

There are just no words sufficient enough to describe Crosby and our love for him. He is such a sweet, wonderful boy with so much personality and warmth that anyone (human or dog!) who meets him falls madly in love. He’s also quite a head-turner and is known in the neighborhood to literally stop traffic. One morning I even had someone stop and ask if they could take his picture because he was their idea of “the perfect Golden.” We’ve now come to anticipate the “Wow, he’s handsome” comments even before they’re made J. Crosby is also as social as they come and LOVES to play, whether it’s as a proud member of the boys’ capture the flag team or tug-o-war with his four-legged friends. This spring in obedience class, another dog was a bit shy and Crosby went out of his way to coax her into the group – our trainer said she’s never seen another dog reach out like he does. I usually respond with pride that if they met his breeder, they’d understand. What you do is so special that we know Crosby is who he is largely because of who you are.

I hope this finds you and all the Felts doing well. Here’s a recent picture of our “little” man (at 9 mos, he’s 82 lbs of solid muscle and trim as can be!).