Specializing in Breeding and Training Golden Retrievers for 40 Years.
The Impact A Coach Can Make 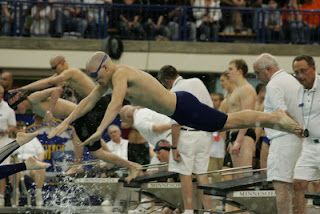 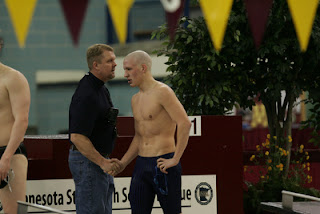 We are thankful we do not have any puppies right now, as we have enjoyed this little break to watch Dan swim in the section and state meets. I have to tell you about the wonderful coach Daniel has, and encourage you if you are a teacher or coach, at what a difference you can make in a students life!

Daniel started swimming in 7th grade, and his coach, Mike Warpula did nothing but encourage him. No matter what place Daniel finished in the race, Coach would compare his personal time and show Daniel that doing his best is all that mattered. As the years passed, Daniel got faster and faster, his form improving. Coach continued to encourage. Last year as we were moving into our new home, the swim team had an all night swim a thon to raise money. We told Daniel he couldn’t attend because we needed his help to move the next morning. Coach told Dan he would help him move if we allowed him to swim…so…moving day, Coach showed up and helped Daniel pack his room and move it over. I have never seen a man so committed to his team. The end of the season last year Daniel missed the state cut by seven tenths of a second. He made a decision that this year he would be section champ in the 200 freestyle. Daniel worked hard all summer and fall to accomplish his goal. Two weeks ago his dream came true as he stood on the podium, and his coach placed the blue ribbon on his neck. It was an emotional moment to see Coach and Swimmer drinking in victory. I know that Daniel’s determination and hard work are a big part of his success, but more so is the part Mike played in his life. He is not only Daniel’s coach, he is someone Daniel looks up to and respects. Mike has been a major influence in Daniels life, as he is an honest, hard working man, with high ethics. He expects the best and gives his best. The relationship between the two is invaluable. High School sports should be a positive experience for kids. It should build self esteem and character. We have one of the best coaches in the nation right here in our little town of Litchfield to thank for the positive experience our son has had..and we have another year to look forward to!